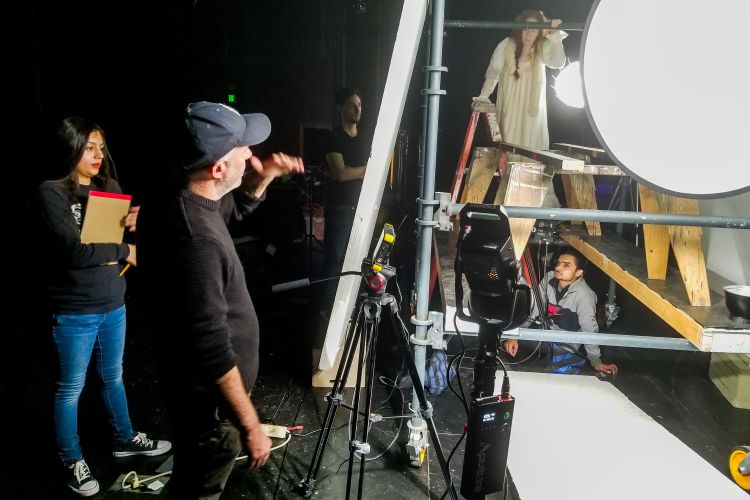 Professor Pontuti and Pacific students on the movie set at the Long Theatre.

Media X professor and director K Pontuti is an active filmmaker with several short films and a featurette on their resume. “The Yellow Wallpaper” is their first full feature movie and it became available in March 2022 on Amazon Prime, Apple TV, Direct TV, Vudu and other streaming platforms.

Pontuti directed and filmed “The Yellow Wallpaper” in the United States and Ireland. Co-written with their partner, actress Alexandra Loreth, this feminist horror film is an adaptation of Charlotte Perkins Gilman's 1892 gothic short story by the same title.

“This is a project that was really interesting to me and my partner, Alexandra,” Pontuti said. “And it's something we really felt strongly about. (…) ‘The Yellow Wallpaper’ is definitely a story that still resonates today and is very relevant to contemporary discourse. We're really excited to get this film out in the world.”

Filming and production of “The Yellow Wallpaper” was also a debut for several Media X students who had a chance to use their skills on a full feature movie set for the first time.

“My involvement with ‘The Yellow Wallpaper’ started when [professor Pontuti] needed some pick-up shots done,” said Noah Lenzi ’20. “It was a really creative shot. It was a rig that they had set up to put the camera under the actor, so that it appeared they were crawling above the camera. And then they were going to reinsert them into the main location.”

“It was great because my students got to really learn how to do research, how to apply the different skill sets that they've been learning in their classes,” said Pontuti. “They were able to help us build the big rig set that we needed. They were able to help with the lighting, working with the cameras and even a little bit of post-production, too.”

From developing the screenplay to making the film publicly available, it was a four-year journey for “The Yellow Wallpaper.” Pontuti used that experience to teach students about all aspects of film production. Almost daily throughout the process, they updated students on what was happening so they could see the positive and negative parts of the work that went into it.

Behind the scenes of K Pontuti's feature film